Memphis, Tenn. - Marsy’s Law for Tennessee presented Memphis resident Phil McLendon with the Champion of Victims' Rights Award for his dedication in helping dozens of women and children in West Tennessee escape from violent households.

As the owner and founder of Absolute Moving Services, LLC, McLendon’s company moves women and children out of violent situations at no cost in West Tennessee. His company also collects donations of furniture and household goods and delivers them when needed to families that are starting over. McLendon’s motto is “no survivor left behind” and he makes resources available to those affected by domestic violence -- no matter the time, the place, or the circumstance.

McLendon endorses and advocates for Marsy’s Law for Tennessee - a law that will ensure that victims of crime have constitutional rights equal to those accused and convicted of crimes.

"I’m very grateful to receive this honor," said McLendon. "Helping women and children is one of the most rewarding things I’ve done with my life. I will do anything I can to bring awareness and equal rights to victims of domestic violence. That’s why I’m proud to support Marsy’s Law for Tennessee.” 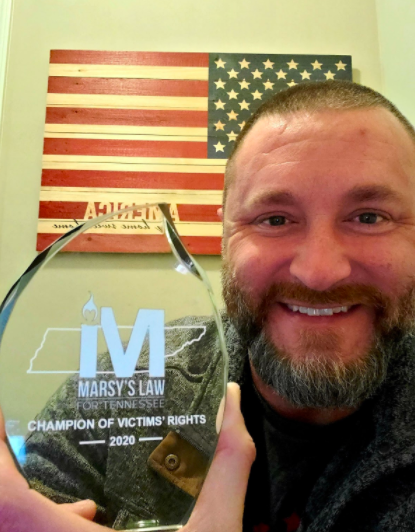 Adopting Marsy’s Law in Tennessee will provide victims with the ability to assert the critical rights to which they are promised including: